Where Humor Fits into B2B Marketing

While many B2B marketers would disagree, the general consensus seems to be that business-to-business marketing is rather dull. It is a fair point that it’s difficult to generate humor when you’re talking about the manufacturing process or technology features, but B2B decision makers are still people. And people respond to humor, especially when it comes to making major decisions.

As Tim Washer, Executive Producer of Rich Media Marketing at Cisco so eloquently put it, “Comedy can cut through all the noise, it makes the point in a very clever way, and it connects with people so they listen.”

For the rest of April, as it is National Humor Month, we challenge you to come up with a B2B digital marketing campaign that attracts laughs, generates chuckles, and gets people to snort by consuming your content.

Being funny is no easy job, as you don’t want to offend anyone, but these marketers did it. With a little creativity and a jiggle of your funny bone, you can make your audience laugh, too.

Cisco was responsible for a humorous Valentine’s video campaign titled “The Perfect Gift for Valentine’s Day,” which explores all the ways a man can tell a woman he loves her. Now, normally people wouldn’t associate Cisco equipment with love, but Cisco did it and the campaign succeeded. 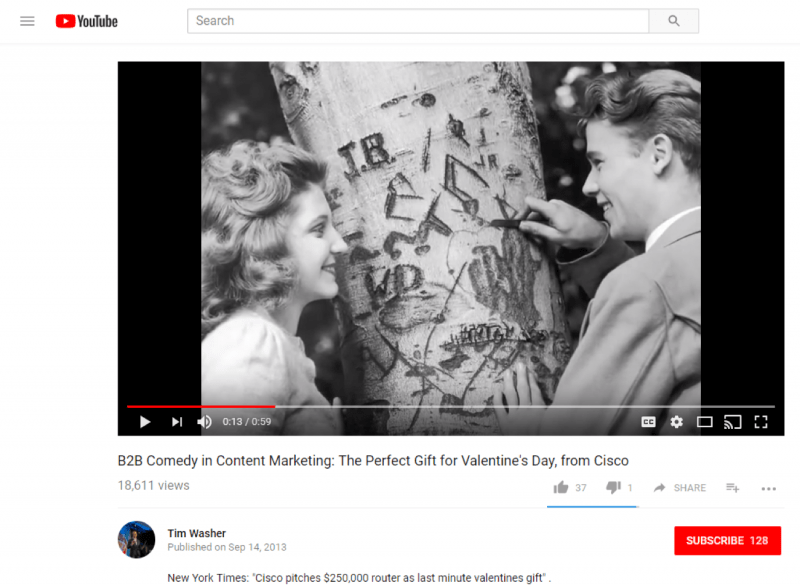 By combining two seemingly unlike things, Cisco infused humor into an otherwise “traditional” campaign that manages to stand out and get noticed.

No matter what you offer, see if there’s a way you can infuse humor into your upcoming campaign.

Look for Opportunities to Be Funny

The best marketers know never to let an opportunity pass without capitalizing on it. Case in point, MailChimp decided to ramp up the laughs – and brand awareness – by owning up to a gaffe caused on a popular podcast. The major email marketing platform paired up with oft-listened to podcast Serial, which resulted in someone saying “Mail Kimp” instead of “Mail Chimp.” MailChimp started an entire campaign around the MailKimp hashtag called “Did you mean MailChimp?” which used lighthearted humor to attract more eyeballs and subscribers. 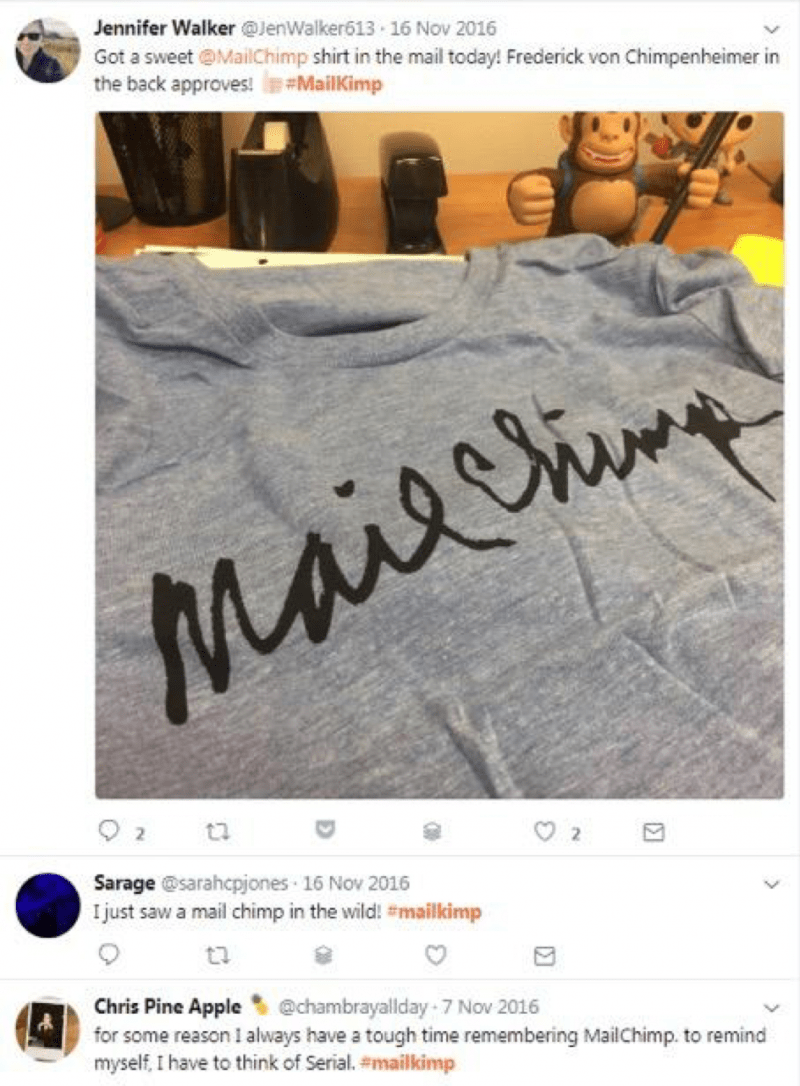 Don’t Afraid to Step Completely Out of the Box

Best-selling author and digital marketer Ann Handley wrote, “In a lot of customer videos, you see folks who are speaking in corporate lingo, using buzzwords and talking points. But CIOs are real people with real personalities, and I like the innovative approach to show true personality in corporate IT.”

Even if you don’t work in IT, showing your true personality and attracting a younger audience sometimes requires you to go beyond the limits of your more traditional campaigns. As an example, ZenDesk decided to throw caution to the wind in its effort to bring the laughs when it coined the campaign “I Like It When He Gives Me the Business,” which took a humorous look at customer and human relations.

Though it was a TV spot aimed at a Twitter-using audience, it showcases a brand willing to court controversy through the use of video in order to tickle the funny bone of its user base. 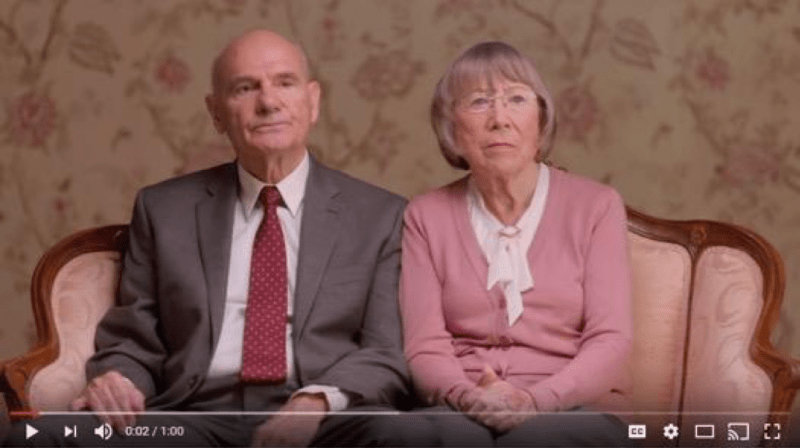 Tell a Different Kind of Story

As marketers, we know how powerful storytelling can be. But your story doesn’t have to be told with mere words or even video. It can also be drawn.

In an interview with Wall Street Journal, Scott Adams, who created the hilarious comic Dilbert, attributed his failures in business to the creation of everyone’s favorite sketched office worker. From investments to inventions to restaurants, Adams tried it all. But it was through those trials that he discovered various “truths” that allowed him to explore the pain we all experience with bosses, memos, committee meetings, expense reports, and other workplace woes.

In telling their own humorous story, Dun & Bradstreet could have created a video or story slide show. Instead, following in Adams’ footsteps, the major brand turned to Marketoonist to create a series of cartoons showing how data-driven decisions make for better marketing results. The joke not only landed, the campaign was a raving success. 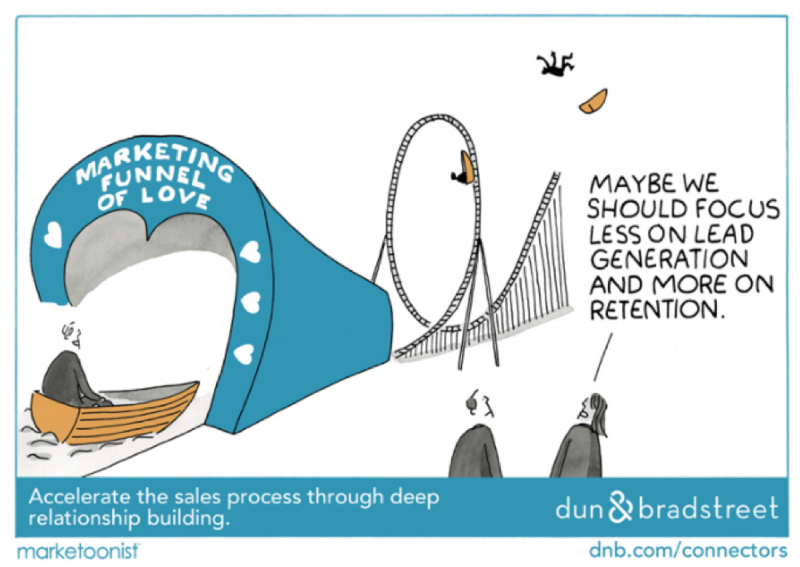 You don’t have to be a rip-roaring comedian to be a successful B2B marketer. You don’t even need to use humor at all, but it helps. Whether you’re selling widgets or whats-its or you have an SaaS that needs to get off the ground, don’t be afraid to let your hair down and let your creativity fly. And whether you’re curating or creating content, don’t be afraid to tell a simple joke, such as:

Q: How do you market your B2B solution to a cat food company? A: Develop your purrrrr-sonas.

Now it’s your turn. In honor of National Humor Month, we want to see your best and funniest marketing campaigns. Ready, set, go… 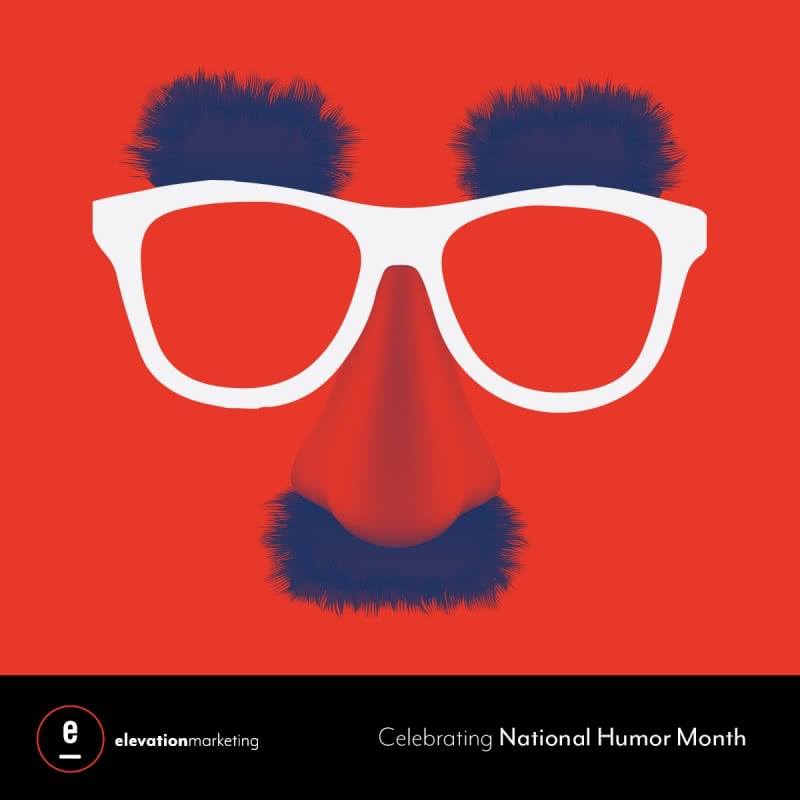 Humor can really build up your brands personality, but it must be integrated. Read how you can create a cohesive plan to improve your overall B2B marketing strategy. 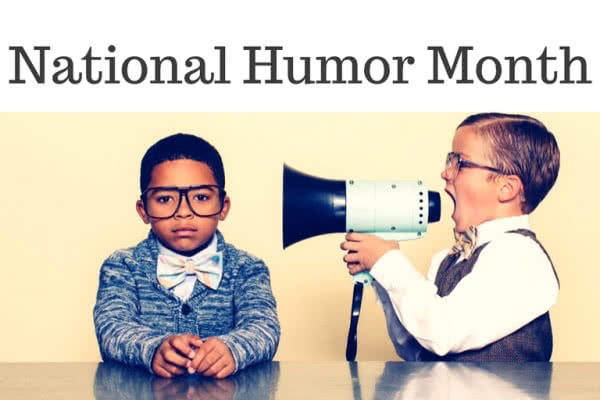